Years ago I started buying books that no one else was likely to buy simply because I thought they deserved a loving home. Since then my library of adopted volumes has grown to a hundred or more that have little in common beyond their pleasant eccentricities. This is my attempt to catalog them one by one.

All About the Insect World

Published in 1954 by Random House, All About the Insect World by Ferdinand C. Lane and illustrated by Matthew Kalmenoff is at first blush a straight ahead book for boys about the creepy crawly things of their outdoor adventures. And if you think I’m excluding the female sex, just remember, it’s not me. It’s the 1950s.

It is this time period which also accounts for the title’s divergence from the run-of-the-mill “learning is fun” kind of a book. The Cold War and its homefront companion the Red Scare were in full swing. Joseph McCarthy’s House Un-American Activities Committee had reached the height of its powers and it paid to denounce the commies anywhere you could. So, the introduction to All About the Insect World.

Though it begins banally enough, it is the build that makes it art.

“Against such swarming enemies we are continually at war.”

“Today we are engaged in a final, all-out battle between communistic atheism and Christianity.” – McCarthy

Political undertones fade as the book continues, but not necessarily its belligerence. As it turns out, the insect world is a tough place to be.

Take for instance African army ants that are known to march in columns several inches wide and up to a mile long. One observer saw such a column “attack a viper several feet long. Within a few minutes the ants literally tore it to pieces.” Talk about strength in numbers.

Then there is the utterly terrifying female tarantula hawk wasp that uses its sting to paralyze its prey, then drags it to its nest, and lays an egg in the spider. Once hatched, the larva eats the still living tarantula while avoiding vital organs so as to keep it alive for as long as possible. 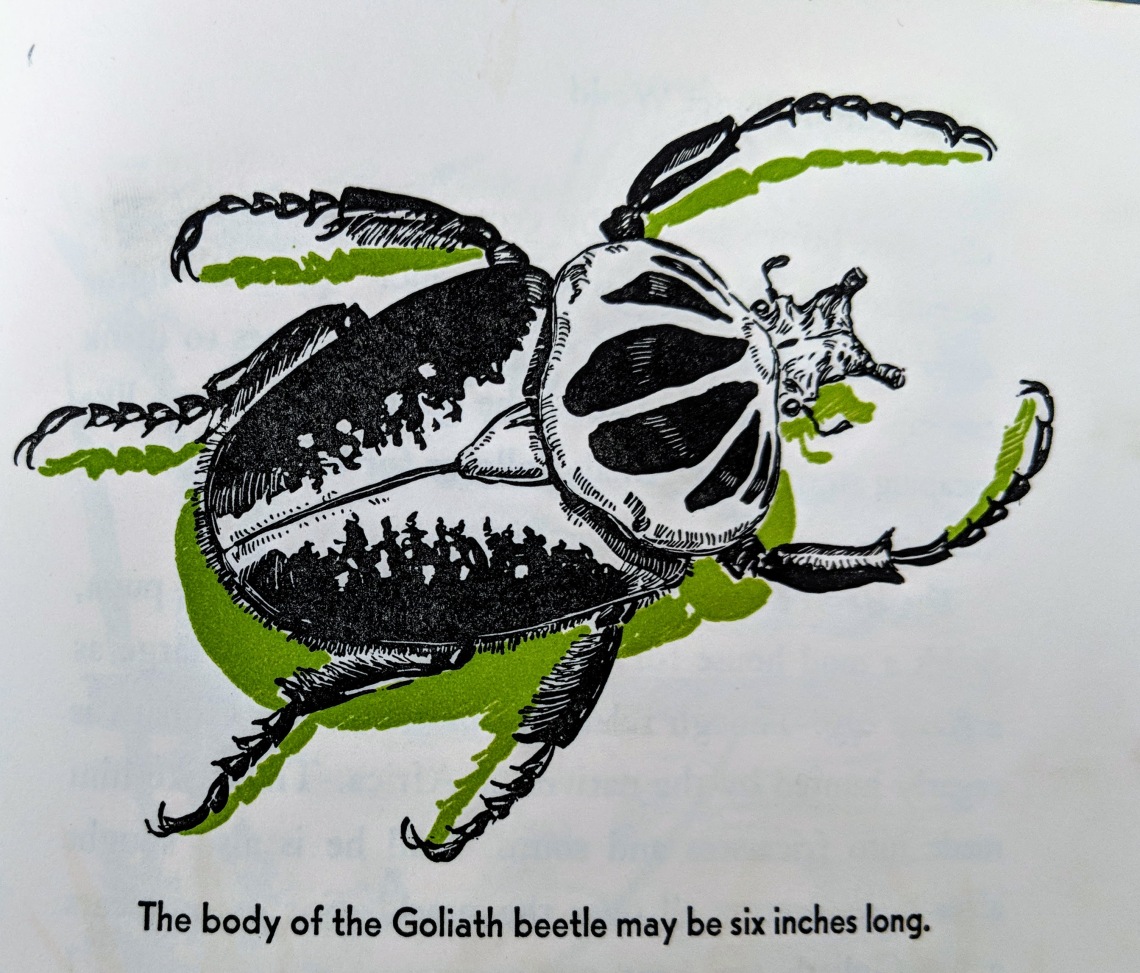 At 6 inches long the Goliath beetle is the world’s largest beetle, and perhaps its most intricately designed as its wings (yes, wings, it flies) “seem covered with brown velvet.”

The stuff of dreams, rather than nightmares, the primrose loving luna month migrates by the moon and glows iridescent beneath its light. 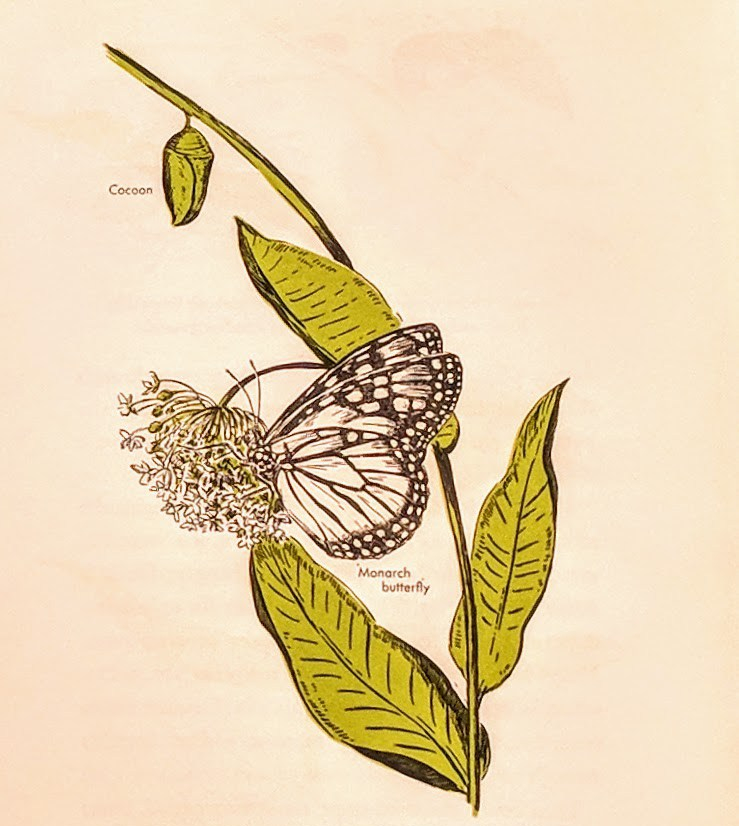 Then there is the long traveling monarch butterfly that winters in Mexico and travels to America for the summer. They are also great lovers of company and once, “in 1921 a swarm of monarchs 250 miles wide swept over Texas. It was estimated that 1,250,0000 butterflies passed a given point every minute of daylight. And the flight continued for 18 days.”

But by far my favorite is the bee. As is becoming increasingly well known, humans depend upon bees for our survival. But bees don’t need us at all and I often wonder when we’ll be toiling for queen bees like her workers. In light of this inevitability, it may be important to understand the societal structure of their hives that are not unlike the strictures of some ancient cultures such as the Sumerians and Hittites, though with a decidedly matriarchal bent. 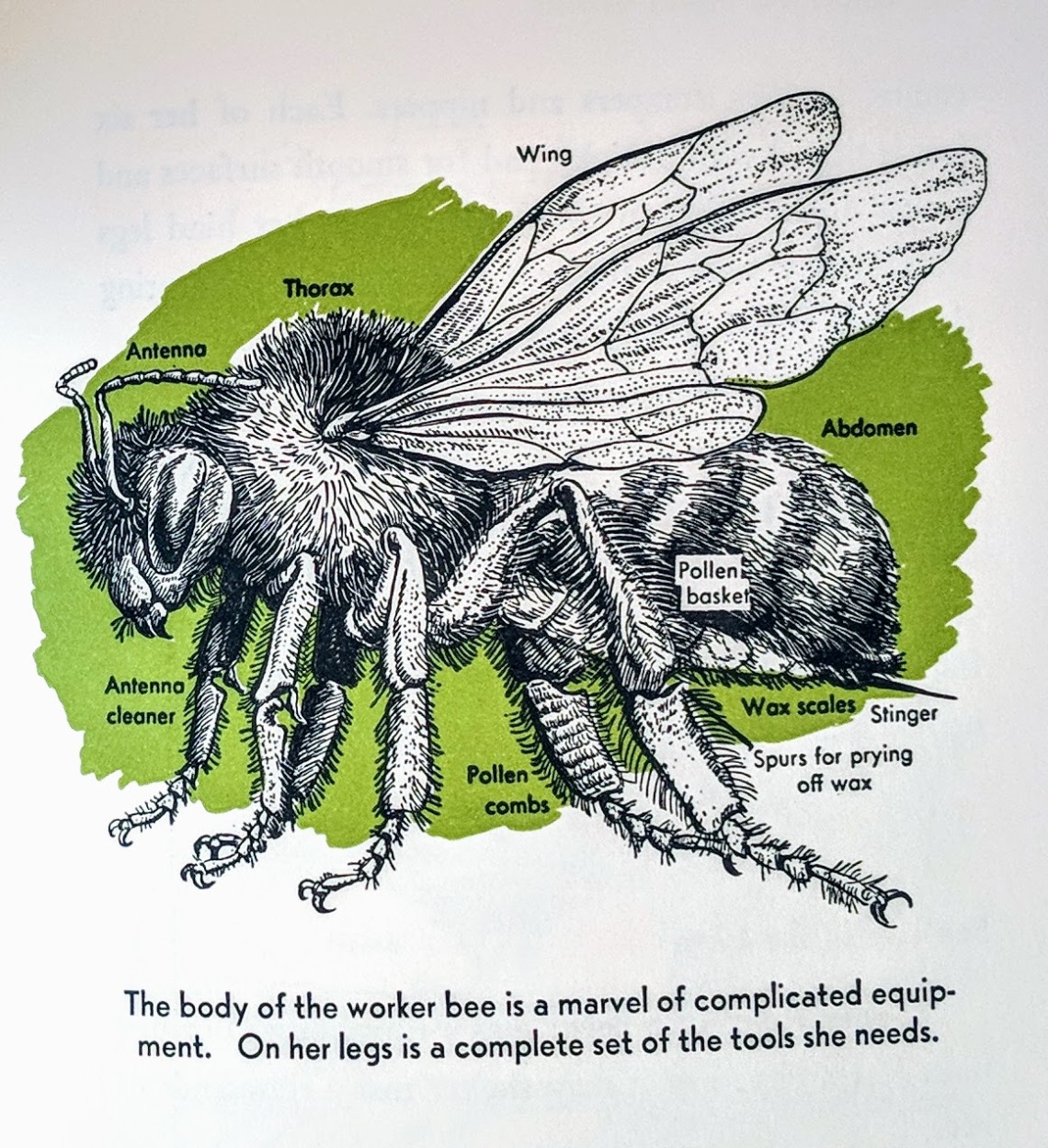 At the center is of course the queen bee for whom her female workers labor so intently. Then there are the males drone bees who have one purpose: to mate with queen. But she only accepts the strongest among them. To determine which will be her mate she flies straight up into the air. The drones follow her. The weak ones tumble from the air in their chase. When the strongest one over takes her, they mate in the sky. Then the drone dies while the queen descends back to her throne in the hive. The rest of the drones are allowed to live until the queen’s larvae hatch, whereupon they are shoved out of the hive by the worker bees to make room for the children.