Are we there yet?

No. We will always be traveling, responds Survey, Zoe Leonard’s retrospective at the Whiney Museum.

Entering the first gallery, one is greeted by a long row of suitcases that conjures the sense of rail travel both by of their age and arrangement in the shape of a single track.

Where are we going?

First to Niagara Falls. To the back right of the gallery are topographical stacks of postcards of the phenomenon dating between 1910 and 1970, each depicting a certain vantage point commensurate with their placement. In other words, she has built a model of the points of observation out of postcards that would have been taken at each respective location on the model. 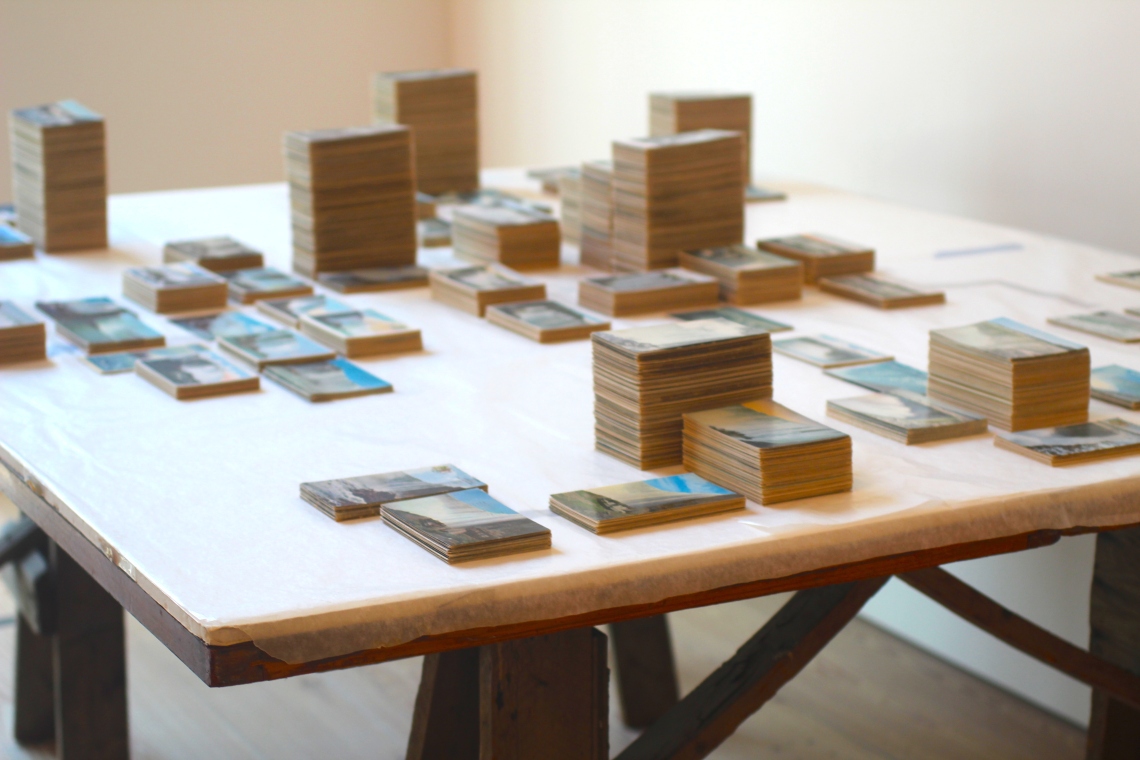 Further down the wall we are airborne where we can better make sense of what we have seen stacked on the table. 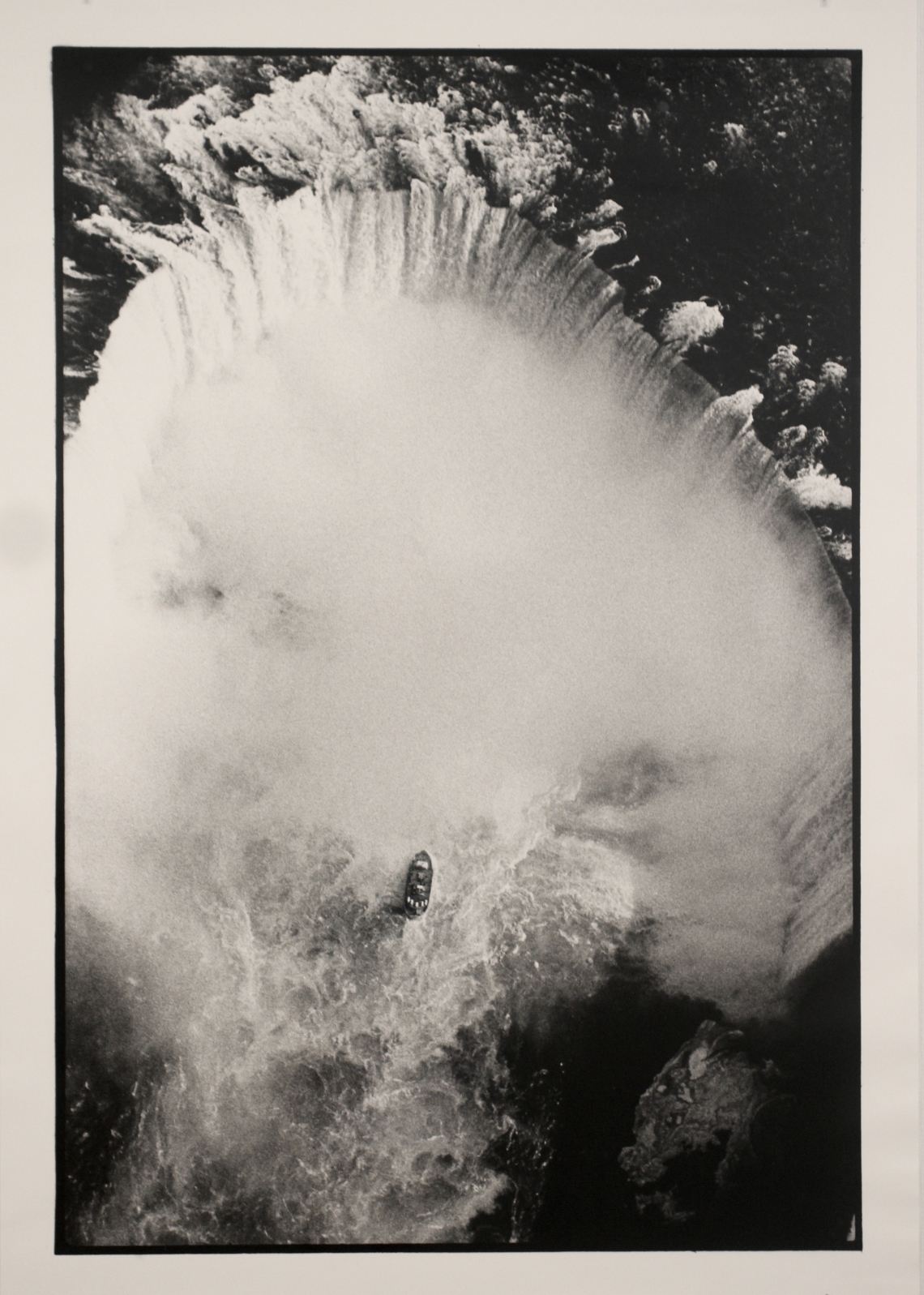 From this vantage point the falls do not seem like a place one would want to motor into, by the armada no less. The small boat borne atop the white water churned and churning from its 165 foot vertical decent does not feel safe by any means. And yet the boat’s bow faces towards this monumental display of gravity.

Why is Leonard so drawn to these falls?

The answer may be contained within You See I am here after all, her monumental work first commissioned by the DIA: Beacon now reinstalled at the Whitney.

Leonard dropped out of high school at 16 to take photographs. She is by all accounts obsessed with the camera, or at the very least a genius with it in her hands. What better subject and object for her unending investigation of the captured image than a site which has been photographed innumerable times?

From afar these photographs blend together with few describable differences. But if one has the time, patience, and wherewithal to look more closely, they are quite different. This one is black and white while the one adjacent employs rainbowed hues as if to conjure the light cut into a spectrum by the waterfall’s spray. Here we gaze out from the east bank and there from the west. Here we stand in Canada whereas there we are in the United States. What other great differences do we fail to perceive awash as we are in information and imagery?

In a light filled gallery we find out why. Another row, this time of stacked books backdopped by a glass wall overlooking a construction site and the occasional pleasure boat cruising down the Hudson River. 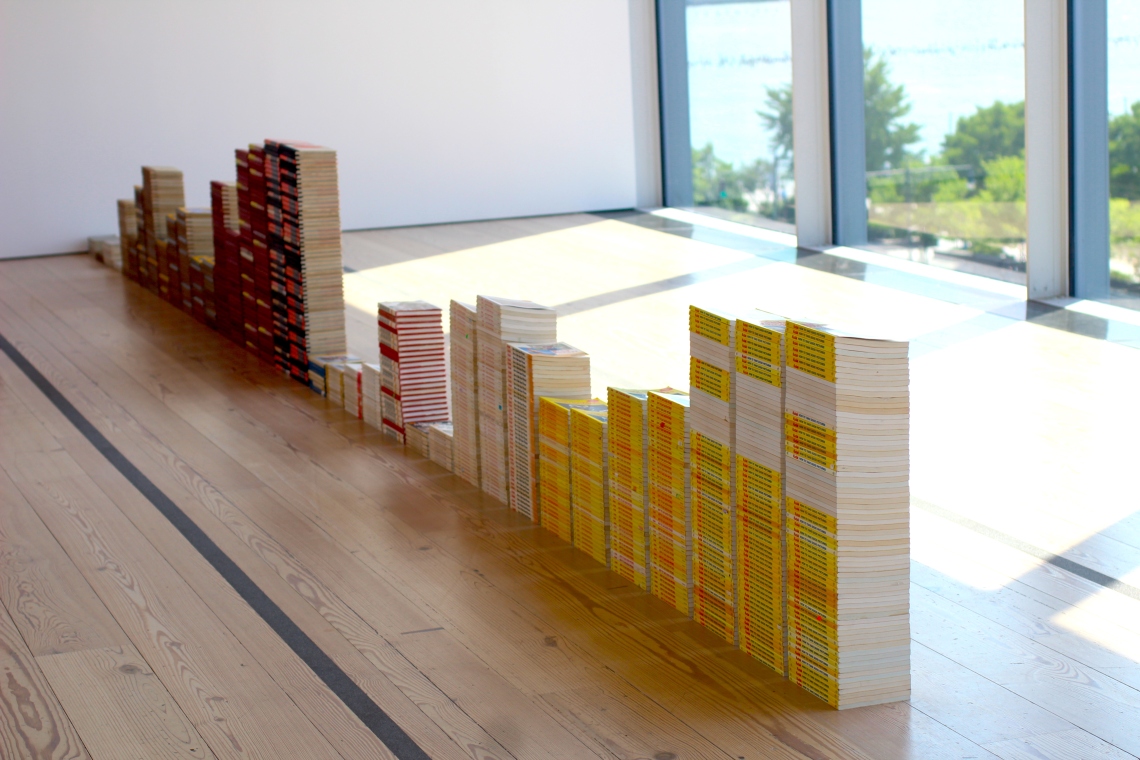 Published by Kodak between 1912 and 1995 How to Make Good Pictures, later retitled, How to Take Good Pictures is a how-to-guide for amateur photographers and physical evidence of the complicated and deliberative process that led us to this moment of Instagram and Snapchat and Walter Benjamin’s worst nightmare / logical conclusion. The change in title from Make to Take is telling. To make is a collaborative process between subject and object, impling at least a certain amount of empathy. When we take we steal, wrest, cleave, abscond. This becomes doubly true in selfie culture where the subject is also the object, where the taker is also the one taken from, a process that creates an endless cycle of self-theft that only profits the platforms on which these acts of burglary are posted.

In such an environment, can photos still be made?

Perhaps, as long as the subject and object are placed in dialog and located in a world populated by interrelationality. Indeed looking at Leonard’s photographs, one is often reminded of a family album.

Take for instance Analogue, a sequence of photographs documenting the vanishing diaspora of dollar stores. Employing New York City as a point of departure, she then traveled to Africa, Cuba, Eastern Europe, Mexico, and the Middle East in search of the aesthetic and economic ties between these mom-and-pop shops.

Or consider Tree + Fence, a series of photographs detailing the slow motion struggle between the organic and the manmade.

It is unlikely the manmade will win as the individual trunks ever so patiently incorporate the metal into themselves. Whether or not this is sustainable or desirable model of growth is left unsaid but these trees photographed over the course of five years share a common bond and one to which viewers may well be able to relate.

But where there is growth there is rot as is the case one gallery over. Leonard’s Strange Fruit recalls the song of the same title that brought the shameful reality of lynching into the spotlight on the national stage. Sewn, zipped, and tied together the objects in the instillation are artificially and visibly made whole but despite this effort, remain in a state of slow decay. Crafted between 1992 and 1997, the work speaks to a new kind of lynching, the willful negligence of African-Americans suffering from HIV-AIDS. 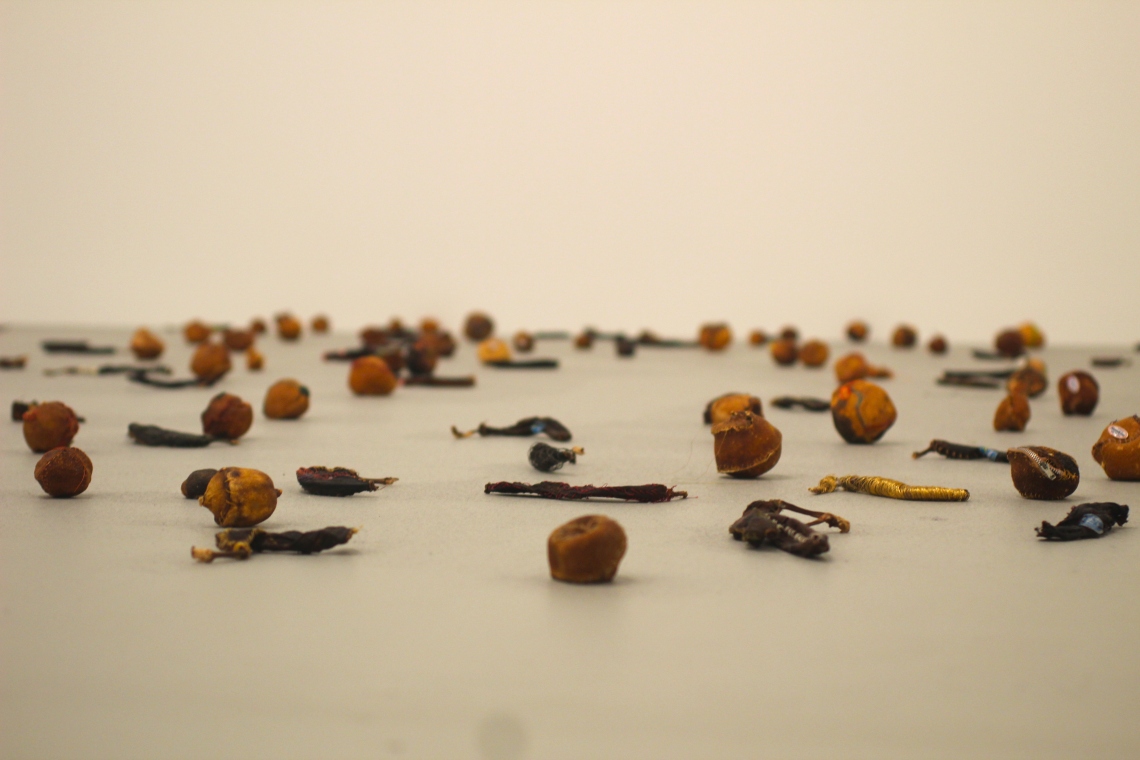 While overall deaths linked to AIDs had started to ebb by the time Leonard started this piece, African-Americans were, and are, overwhelmingly effected by the disease. The resources dedicated to treatment and education remain inversely proportional. 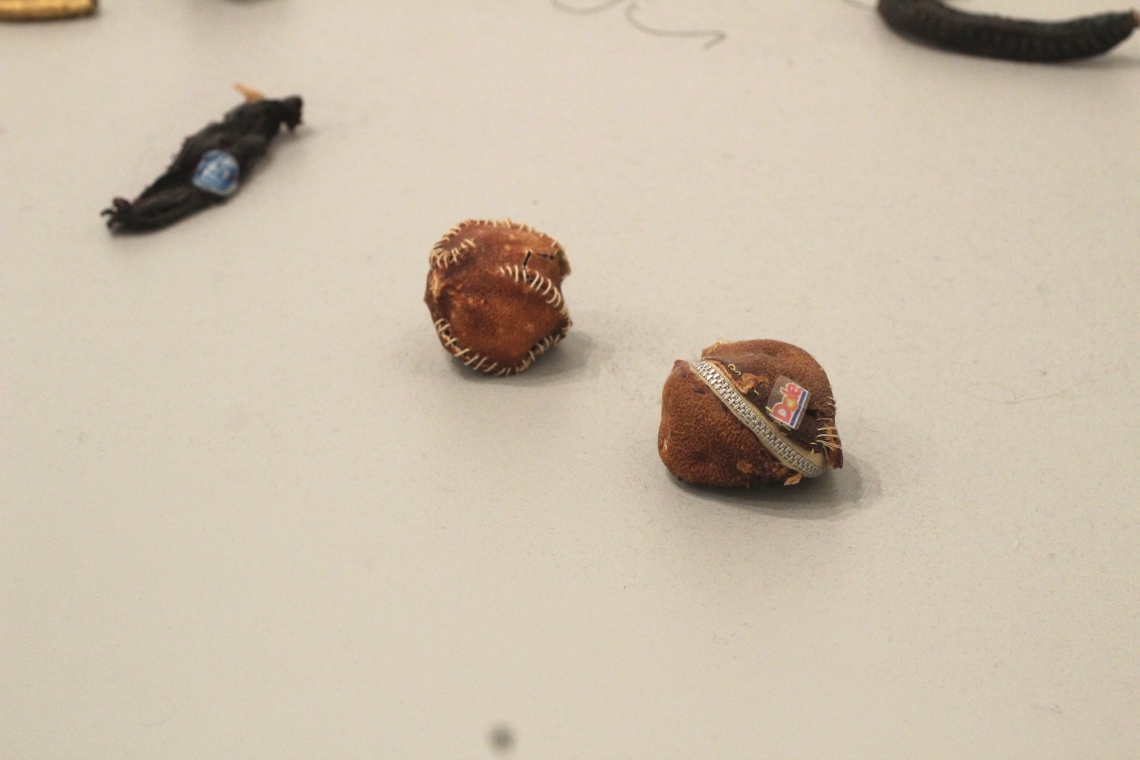 And so we arrive to where we were going all along. A single sheet of typewritten paper entitled, I Want a President. 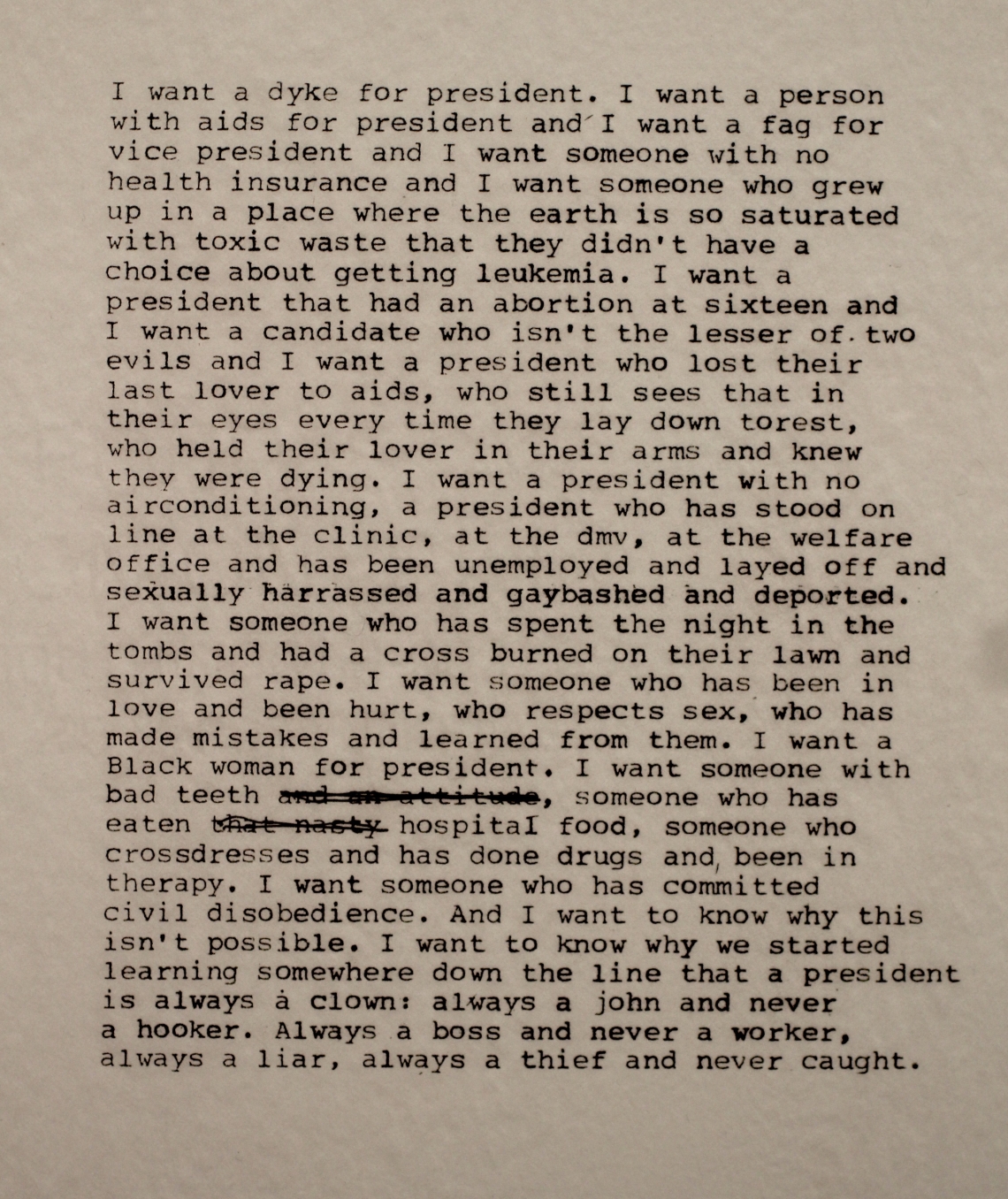 Leonard’s ouevre strives to find, create, and recognize relationships between subjects and the objects. But what of life not frozen in time by film or pixels?

I Want a President is a manifesto for merging the subject with the object, for placing authority in the hands of those who are affected by authority rather than those who by wealth and privilege are immune. It is a model for leveling the stage from which authority conducts its business so that all might see and participate in these movements together like a collective and improvisational dance.

As noted from the first, we will always be traveling as such a model requires.